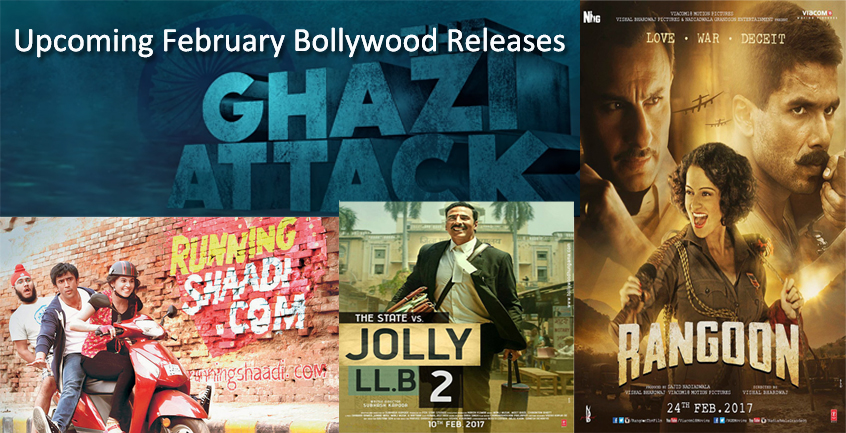 There are 5 Upcoming February Bollywood Releases big movie this year in February to watch in theatres:

Running Shaadi.com movie is scheduled to release on 3rd of February 2017

Running Shaadi will be an interesting movie to be seen in theatres, in this movie Taapsee and his fellow mates will be opening a website for people who would like to run from home and marry their loved ones they will be helping them who asks their help through the website. Taapsee Panuu will be appearing in the two release of this month one is Running shaadi and the other is The Ghazi Attack. Tapsee pannu will be playing a lead role in Running shaadi.com and where as in The Ghazi Attack Taapsee will be playing a role of a Refugee in this movie.

This movie is scheduled to release on 10th of February 2017

Akshay kumar is seen as a jolly llb as it is a sequel of Jolly LLB which is a huge success in Bollywood where the lead role from Jolly LLB was played by Arshad warsi and Amrita rao. In Jolly LLB 2 Akshay kumar and Huma quershi are the lead roles. The story is surrounded by the lawyer and in courts as same as the Jolly llb where he fights for justice at what ever cost same will be seen in Jolly LLB 2.

This movie is scheduled to release on 24th of February 2017

Upcoming February Bollywood Releases of Kangana Ranawat is seen in one movie which is Rangoon with the interesting character as Miss Julia in the movie, as in trailer and the songs of this movie kangana already started stealing the show as Bloody Hell as she appears riding a horse in to the crowd in a party and her crazy movie from the song Bloody Hell.

Saif Ali khan and Shahid Kappor Upcoming February Bollywood Releases will be seen in Rangoon movie as the main leads as both the actors are playing a good role as Said ali khan plays a role of a well dressed man where as Shahid kapoor in a military dresses with the new look.

This movie is scheduled to release on 17th of February 2017

Rana Daggubati the Bahubhali starrer villan is another Upcoming February Bollywood Releases coming up now with the submarines to the theatres as this will be first Bollywood submarine movie and the Rana Playing a lead role will be interested to see in theatres this month.

This movie is scheduled to release on 3rd of February 2017