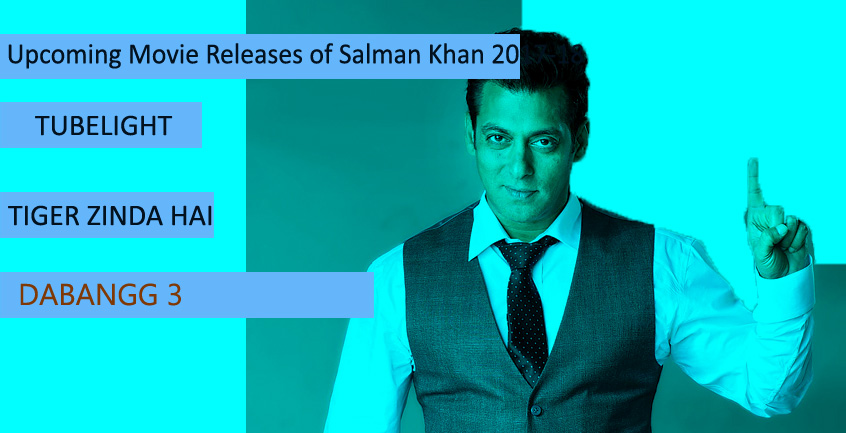 Salman Khan upcoming movie releases this year in 2017 with the biggest releases on eid this year with Tubelight and in December 22 Salan khan is back with Tiger Zinda hai movie which with a powerful action sequence movie which is a sequel to Ek tha tiger. Before looking on Upcoming Movie Releases of Salman Khan lets know a little bit about Salman Khan known for his Dabangg acting and he is also called as Dabangg actor, Salman khan born on 27 December 1965. Salman khan not only known for his acting and in addition to his acting career salman khan is also a charity non-profit organisation, Being Human.

In people Magizine 2004 Salman khan was ranked as the 7th best lookin man in world, and salman khan also ranked seventh in forbes in first global list of highest paid actors in the world placing him higher than such Bollywood actors Johnny Deep, Brad Pitt, and Leonardo Dicaprio and Dwayne Johnson.

Salman khan started his career with a supporting actor role in 1988 film Biwi ho to aisi and then his acting career started with the huge success. Salman khans first leading role in bollywood is Maine pyar kiya which is a romantic family drama and it is one of the biggest hit from bollywood and this movie became one of the highest grossing film. Salman khan grabbed best actor male in the filmfare. Later this movie Maine pyar kia was dubbed to english as when love calls and in other several languages.

Salman khan movie release in 2016 was Sultan, which is based on wrestling, and he plays a role of a journey of wrestler who became wrestling champion and he stops wrestling after the death of his son and later comes back to defeat all the odds and he comes victorious. Sultan Slam is famous in this movies and Sultan slams in the ring the opponent will not move. Sultan Slam became famous in this movie and Salman khan played his role tremendously as a wrestler very well which gave Sultan movie a huge success and stood as a blockbuster movie with huge box office collections.

Salman khan will be playing a role of Laxman, this movie is a historic war drama, Salman khan plays a role of a man who from India who falls in love with a girl from china.

Synopsis: Tiger Zinda Hai movie is a sequel of Ek tha Tiger, Salman khan plays a role of RAW agent and he returns from the dead to accomplish a mission to take on over a international terrorist organisation and by this time zoya with powerfull action sequence by katrina kaif in Tiger Zinda Hai.

Released Date: Not Confirmed By Makers

Synopsis: Yet to be confirmed.

Released Date: Not Confirmed By Makers

Synopsis: Yet to be confirmed.

Synopsis: This movie will be a sequel to Dabangg and Dabangg 2